These classes are different __ other classes because the students are disabled. The children have every reason to be proud __ their efforts. Their parents seemed satisfied…their progress. The children come from large and poor families, … prevents them from having proper schooling. I’ve always been… about football. Delegates expressed strong _____ to the scheme. Some of the more time concerning jobs can now be done by machines. I have been fascinated by…since I was at secondary school. He has not developed mentally as much as others at the same age. He’s…child. ​The President expressed his deep sorrow over the bombing deaths. He invented a new kind of wheelchair for the…. She displayed some of her paintings at the local … He earns his living by taking photographs. He’s a(n)…photographer. In spite of her deafness, she played the violin very well. The aim of the LIVE project is to train students from developing … . When I was a child, summers would be warmer and winters colder then now. What do you use to do when you felt afraid? The number of people employed in agriculture have fallen in the last decade. You have to buckle your seat belt now or you couldn’t drive. It’s the law. She’s always annoying about something. I can’t find my diary, that is a real nuisance. The severely disabled needs full-time care. It took them at least two months learning how to pronounce these words. Helen Keller, who was both blind and deafness, overcame her inabilities with help of her teacher, Ann Sullivan. Lake Superior, that lies on the US Canadian border, is the largest lake in North America. How was your weekend? Oh, my weekend was terrific thanks. What did you do on Saturday? On Saturday, I participated in the local charity society to visit Nguyen Dinh Chieu Special School for the Blind. What were the visually impaired students doing when you came? Well, they were having a music lesson. Really? How can they learn music without seeing? They listened and used their fingers to touch the music notes in Braille and sang. Great! Next time call me if you have such an activity. … he was not a musician himself, Lawrence Hamond developed an electronic keyboard instrument called the Hammond organ. …. the storm. I would have been home before eight. The government is doing nothing to help…It rained all the time, … was a great pity. … you really need is a long holiday. I…like going to pop concerts when I was a teenager. Rick left the party early because he … a headache. Claude didn’t…in Canada. I remember you. You …. to school here. The old….a lot of experience of life and can deal with most situation. Can you show me … the film in this camera? I didn’t like the noise in the city at first. But now…here. Galileo …his first telescope in 1609. Last summer, we had….holiday in Spain. … at the party, we saw Ruth standing alone. Louis Braille was born in 1809 in Coupvray. He was a French teacher of the blind. He himself was blind from the age of three, and in 1818 he went as a foundling to the National Institute for the Young Blind in Paris. Soon showing marked ability in both science and music, he became famous in Paris as an organist and violoncellist. In 1826 Braille began teaching the blind in the institute. Braille is known for his idea of modifying the Barbier “point writing” system, used for coded army message, to enable the blind to read. Point writing consists of embossed dots and dashes on cardboard; the Braille system derived from it is used successfully today, in slightly modified form, and in many countries. The first school for blind, deaf and mute children in the Tibet Autonomous Region celebrated its first anniversary on Friday. The school is built in the eastern suburb of Lhasa, capital of Tibet, and is designed to hold 200 students covers 20,000 square meters.
The school curriculum includes Braille and sign language- training, Tibetan, mathematics, writing, ethics training, physical education, arts, handicrafts, speech and walking courses. At the celebration, the audience was touched by, a silent song expressed by the students with sign language. Baiba Toinzhub, a 10-year-old blind child, can speak fluent Chinese and is very good at singing and dancing. He told the visitors that life in the boarding school was comfortable. When did you last ride a bike? The train was due to leave five minutes ago. I didn’t like football. The police blocked off the road, which caused a traffic jam. Henry should have done his homework last night but he watched TV instead. 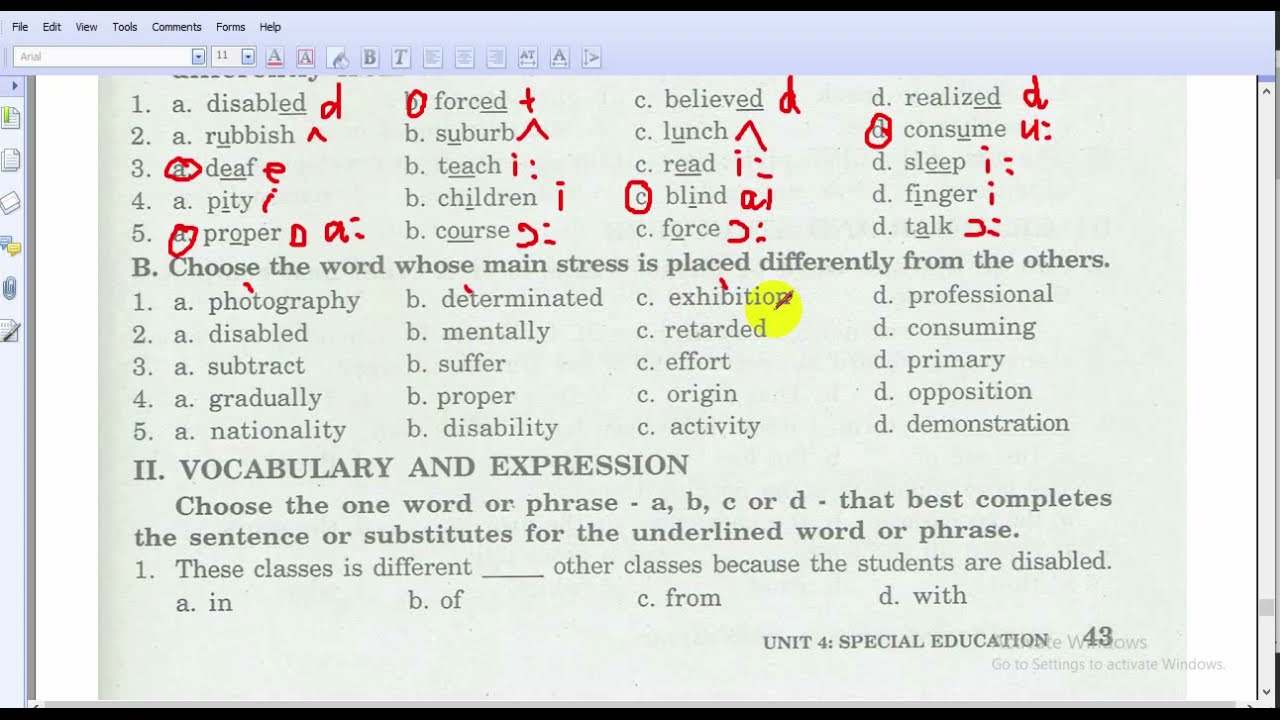